HINT is disappointed that a respected publication like the Sunday Times would allow publication of an article of such poor quality.

We are further surprised that a journalist of Shanti Das’s calibre (US Bureau Chief of SWNS. a prominent news agency that prides itself on real journalism) would author a piece so clearly devoid of even the most basic research. It is considered at best, a sensationalist, badly informed opinion piece. HINT demands a retraction of this article together with a correction of at least the most egregious factual errors, listed below. 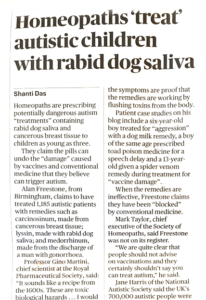 To be clear Homeopaths do NOT use biohazardous materials. All homeopathic medicines are manufactured and sold in highly regulated pharmacies and subject to the same scrutiny concerning safety of manufacture as pharmaceutical drugs.

Homeopathic medicines are specially prepared using a process of potentization, which includes high levels of dilution.

Dr. David Colquhoun, Emeritus Professor of Pharmacology at University College, London, has written extensively on the high dilution aspect of homeopathic medicines. At a 12c dilution the preparation already exceeds Avogadro’s number, a chemical law which states that at this level of dilution, not a single atom or molecule of the original substance can be present. Hence there is absolutely no possibility of biohazardous material in the homeopathic medicines prescribed in these cases.

Professor Gino Martini, chief scientist at the Royal Pharmaceutical Society, when asked to comment is quoted as saying: “….These are toxic biological hazards … I would advise caution.” is also fully aware of Avogadro’s Law and the high dilution aspect of homeopathic medicines.

The Medicines and Healthcare products Regulatory Agency, charged with regulating the safety of manufacturing of medicines and their usage, including pharmaceutical drugs, simply advised that it had not “authorised any medicines for use in autism”. Homeopathy delivers individualised treatment for each patient and their specific set of symptoms, which in the patients described, includes symptoms diagnostic of autism. This is a key difference that separates homeopathy from conventional medicine, which relies on first naming the disease before being able to prescribe a drug.

There is no homeopathic principle which says “the cause is the cure”. That would be isopathy, a different discipline.

Ms Das rightly quotes the homeopath clarifying that he does not, “claim to offer a cure…”, however he does “…claim that homeopathy can do amazing things for these kids.”    We suggest that is the story Ms Das should have investigated 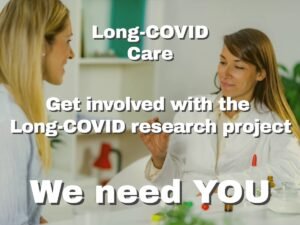